Can we truly see the Rainbow??? 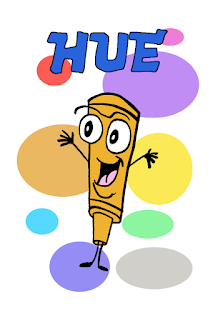 According to the Business Insider people of numerous ancient societies couldn't see the color blue, and current members of the Himba tribe cannot see blue because they never gave the color a name.

Check out the article below to get the full details.

With that information in mind, I created a card game called Name That Hue to help people see color.

But, how can you give a color a name if you don't see it?

The Egyptians got much of the world to see blue with their dyes.

They forced blue onto the world.

I force numerous colors on people with the game's playing cards.

You look at a card with a hue and you have one minute to name it. Of course, to make it fun, there's another playing card that forces you to add something to the name you create. It can't be too easy.

If you want to play Name That Hue, click on the link below.

It will lead you to where it is being sold.

This one is perfect for people who are tired of the same old card games and want to try something new.

Name That Hue is a fun way to bring out your inner artist.

See the Rainbow.
Posted by Tommy at 11:28 AM No comments:

Fred the Mustard Packet Comics are on Webtoons

Click the above link to read tons and tons of Fred the Mustard Packet comics.

Subscribe to Fred the Mustard Packet on Webtoons.com to easily catch every update.

We appreciate your readership! 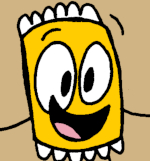 Discover your own capabilities as an artist.

So, the idea is simple. Animate a cranberry.

Make it bounce, make it break, make it come to life. Whatever!

Make a new animation for each week in November and give it the following hashtag.

Share it on the social media platform(s) of your choice.

The above link leads to my first shot at animating a cranberry.

Check it out, and let me know how I did.

Let's just say that I have room to grow... like a cranberry.

Animate using the techniques of your choice and share it.

It was a lot of fun, too much fun, creating a new piece that has a retro flavor.

We looked to the Marx Bros. and Laurel and Hardy to create the overall tone of the film. However, it takes place in the present. It's hilarious just like its visionary director. If you're not aware of Rick Larsen's comedy, seek out his zine Fat Dracula. You won't be sorry.

Be on the lookout for announcements of when and where we end up releasing this film.

I hope to see you soon at the premier!
Posted by Tommy at 3:15 PM No comments:

Phoenix Zine Fest is happening this coming Sunday Oct. 20th at Unexpected Gallery from 11am to 5pm. That's at 734 W. Polk St.

I'll be there as Dr. Zombie: Monster Family Physician. Other comics creators and zine makers will be there too. 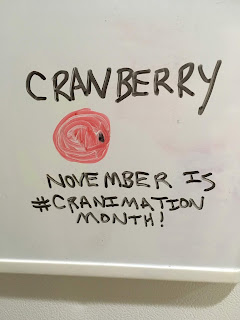 Every week during this November, I'm going to animate a cranberry... doing something. I'll post the results online with the hashtag #Cranimation. Join me. Make some cranimation this November!
Posted by Tommy at 8:26 AM No comments:

Email ThisBlogThis!Share to TwitterShare to FacebookShare to Pinterest
Labels: Cranimation

I made Business Cards for Fred the Mustard Packet! 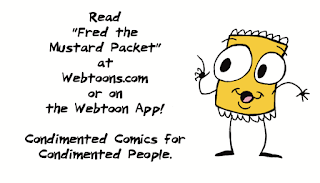 I'm looking to promote Fred the Mustard Packet in different ways, and yes, I actually printed and spread around business cards. Do you live in or near Phoenix, AZ? Maybe you'll find one. If you do, take a photo and tweet it to @TommyCannon for a free digital copy of Forty-Eight Flavorful Moments with Fred the Mustard Packet.
Posted by Tommy at 1:42 PM 4 comments:


A Sketch for a Future Book

I have two sketch books happening right now for future books. I just had a meeting with Shane Carey about expanding a certain superhero universe. Plus, I have a stack of blue line art work for a future issue of My Big Break.

It seems like I'm scatter brained, maybe I am. However, I feel like having several coals in the fire  helps to keep my feet warm. As I plug away at things certain projects tend to float to the top, then they get made. When something gets made I like having something else right behind it. It keeps me mentally limber, and it gives me a ton of IPs to work with.

Having a scattered brain can be an asset. Make it work for you.
Posted by Tommy at 4:33 PM 2 comments:

The Greatest Sandwich Ever Sold!

Click the above link to check out the crowdfunding campaign for a new short film starring me and my buddy Arturo Ruiz!

It's sure to be delicious.
Posted by Tommy at 10:44 PM No comments:

Click the above link to get Dr. Zombie's Card Game!

That's right, your tabletop is just itching to have "Dr. Zombie's Creature Lab of Doom!".

It's a drawing game that will exercise your creativity by forcing you to draw horrifying monsters!

How do I get more Dr. Zombie in my life?

Phoenix Fan Fusion is coming up and I am thrilled to have some Dr. Zombie products on sale.

His Monster Family Physician Comic Book can be purchased at the above link.

His Kindle Comic of short, comedic, horror stories can be purchased at the above link.

And, believe it or not, he has a card game! That can be purchased at the above link and it's super fun!

Dr. Zombie has been a part of my life on the stage, screen, and page for almost 10 years. Keep reading to learn of my history with this demented character.

However, let’s talk comics. Dr. Zombie is perfect for comics. You can get a comic book of Dr. Zombie’s twisted tales for your Kindle right now even. But, we are doing different comics now. Yes, the gag-a-week comic is now in Dr. Zombie’s lab. Like a fool, I have recently been trying to contact Rob Liefeld about making his “Shrink” comics into a calendar. I loved the idea of a psychologist treating a different superhero each month. But, he’s promoting bigger things these days. Go figure. “Shrink” belongs to Mr. Liefeld, but the concept of a genre comic in the gag-a-week format can belong to everyone. So, that’s what I’m doing. I’m smashing sci-fi, horror, and the gag-a-week format together to create “Dr. Zombie: Monster Family Physician” for the Two Gay Geeks at TGGeeks.com. The concept is that he’s a monster family physician, because the mad science lab doesn’t pay much and he has to a do a day job to fund his passion. I hope you enjoy this bizarre journey of cartooning and comedy. 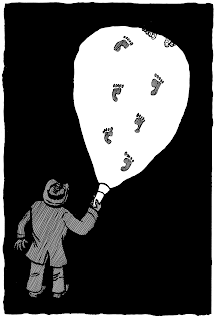 I got to make a piece of promo art for it which was fun.
It's a zombie-noir-comedy with a lot of clever writing.

https://soundcloud.com/stationaryhobo
Click the above link to go to find the podcast.
My buddy, Ernesto Moncada, makes promo art work for this podcast as well. So, be on the lookout for his stuff too.
Posted by Tommy at 3:23 PM 2 comments:

The motion comic for Vision #1 put together by The Russian Comic Book Geek is pretty solid.
The motion in this piece solely comes from camera movements on the images from the comic book, but the lack of animation is fine, because that allows the viewer to dwell on the artwork of Gabriel Hernandez Walta and the cover art work of Mike Del Mundo. The artwork tells the story perfectly in the right tone of the Vision trying to live a suburban life with a family.

The moments of dwelling on the words "kind" and "normal" were very interesting, especially hearing them being discussed by robots. It made me think twice about how we use those words in everyday life.

Also the voice acting in this piece is sensational. The narrator did a great job and the Vision family had just the right amount of alienation in their sound and performances.
I will give this piece 5 out of 5 cannonballs for great voice acting, great writing, and great artwork.

Click the frame at the very top of this post to watch the motion comic. Thanks for reading. 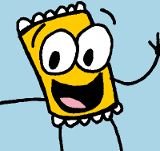 If you answered "Sure, whatever." to any of the questions above. You should fill out the form below, and be a part of my mailing list.

Tommy Cannon News will delivered straight to your inbox, as it should be.